To follow on from my previous post….I like the Riviera CC a lot, I really do, but I wonder how effective these run off areas around a few of the greens are?

Most times the idea of having tightly mown areas (cut at fairway height) as green surrounds is a really good one since it exaggerates the shot opportunities – you can putt, chip, bump + run etc. You have a multitude of shot options available which makes the game more interesting (and colourful) not to mention you have to think a bit more about how and where you going to hit the ball. 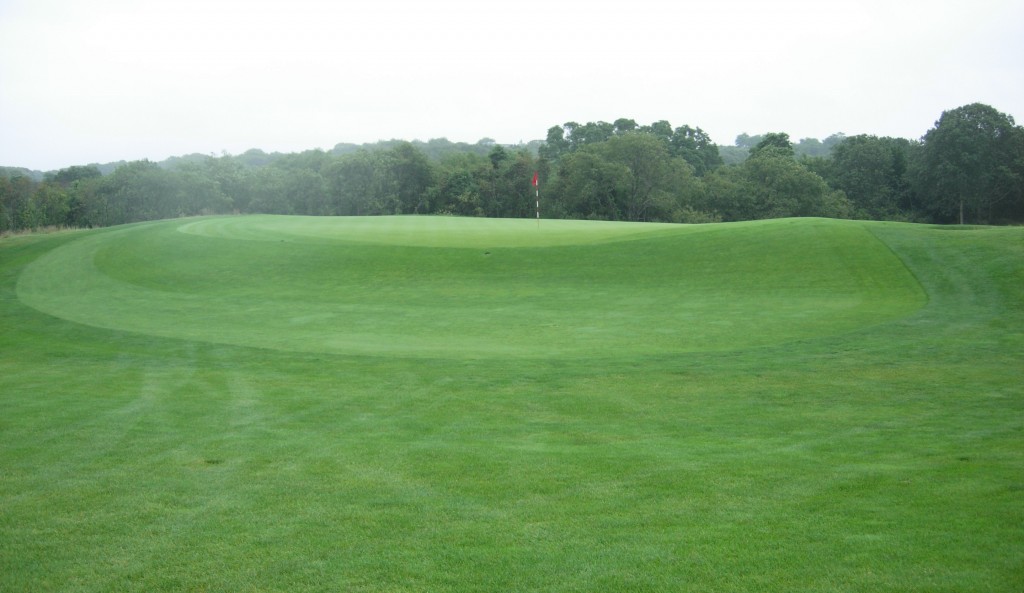 You see in theory it is a great idea, and I advocate this approach where possible, but the conditions need to be spot on to make it work. What do I mean then? I am referring to the sub surface conditions (sand being the ideal – almost a must), maintenance practice but more so the TYPE of GRASS that will yield these kind of play characteristics.

At Riviera CC the grass of choice for the fairways and green surrounds is Kikuyu – a grass native to Africa but also very common in other parts of the world including places like Australia and the United States. Kikuyu is very much a warm season grass with a broad leaf blade and very thick, extensive rhizomes and stolons….it thrives in the heat and goes dormant in the cold. Golfers love playing off the spongy lies you get on the fairway but fear playing out of this grass when cut as rough – in fact golfers have been known to break their wrists playing out of kikuyu rough.

Kikuyu grass growing wild on the Island of Madeira

I have visited a couple of sites, pre-design in the feasibility stages, and found them overridden with kikuyu grass…its not a lot of fun trampling through this stuff not knowing what you could be standing on and particularly in Africa. On one of those occasions the agronomist (who almost passed out having seen the extent of the kikuyu across the site) recommended stringent measures to get rid of it. He produced a very comprehensive booklet all of 20 pages + highlighting how to do this (Note: I don’t think you will ever get rid of it but he suggested removing the top 50 cm layer of material and burying this somewhere off site (and as deep as possible). It really is that difficult to remove altogether and why in most cases green keepers, around the world, learn to work with it too good effect.

Going back to Riviera CC – the problem I have is that the very nature of this grass makes it difficult to hit certain shots effectively from it. This includes in particular the bump and run shot and putting – as I said I should know having grown up learning the game on kikuyu fairways . In my experience there is a good chance that the ball and blade will stick to the grass….and most times both will decelerate (versus accelerate) towards the hole.

Make no mistake having runoff areas at Riviera CC certainly looks good visually but I question what their true function is? If indeed it is too create / promote a multitude of shot options (as discussed) then I question that.