It is fitting given that the European Tour is heading down to East London, a sleepy coastal city with an impressive golf course – East London GC, that I should write about one of my favourite golf architects and one many have never heard of.

Colonel Stafford Vere Hotchkin (1876 – 1953) was an army man, member of parliament but perhaps above all else a golf architect. He earned the title of Major after having served in the Palestine and Mesopotamia campaigns during world War 1 then after the war he became an honorary Colonel of the 60th Field Regiment.

But it’s his work as a golf architect that had me interested. I suppose the fact that I grew up in South Africa had a part to play in this…you see much like Alistair Mckenzie’s epic voyage to Australia Mr Hotchkin travelled to South Africa in the European winter of 1927/28 and was involved in the design / redesign of many golf courses down there.

East London GC being one of the golf courses he was involved.

His work at Humewood GC (still really the only links golf course in South Africa) was particularly good and probably where he was most involved. He would also show his hand at other championship venues like Durban CC, Port Alfred and Mowbray. Many of the golf courses he was involved, during this trip, are now noted for how well they conform with the existing environment. This should not surprise anyone given his thoughts on how golf and the environment should merge as one. The colonel would go onto say *’the best results are obtained by making a course conform to the natural surroundings that already exist, so that it will not look artificial and fail to blend with the landscape’

However, it was his work at Woodhall Spa and West Sussex (Pulborough), in particular, that had me jumping at the bit to learn more…who was this Mr Hotchkin fella and why don’t we hear more about him?

I will make no bones in saying that I think Woodhall Spa is one of the best examples (anywhere) of how good a golf course can be on relatively flat piece of land. As for West Sussex – well if there was any golf course (other than the ones I have worked on) I would most want to be a member this would probably be the golf club. Admittedly Mr Hotchkin was not the sole designer of both these courses (although you could debate this for Woodhall Spa where he resided for much of his life – on the golf course) but his influence is evident.

I don’t believe I have ever felt as lost in nature as I have playing these two classic golf courses. Sure both courses are ‘hidden gems’ mostly because they are in the country far from anywhere but they blend into their surrounds magnificently.

Woodhall Spa is a championship golf course in every way. It will test every bit of your game. There is much to admire about the course starting with how well the vegetation and golf course work as one. The mature trees and scrub bleed strategically into the golf at opportune moments. Couple this with the heather bush found dotted about and you can only imagine how colourful and memorable the place is. Then there is the bunkers which could, by some, be deemed cruel particularly if you should find yourself in one. Perhaps one or two are too penal but by golly do they add interest and give the golf course identity…..and lest not forget how they add strategic value as well. It was Mr Dye who once said about some of his courses that he purposely designed and built bunkers that would produce shots no one would forget. To continue in his words ‘I intended that the player be required to attempt an almost impossible shot with the potential for a once in a lifetime thrill if they could pull it off’. Perhaps the same could be said for some of the bunkers at Woodhall Spa.

A wonderful golf adventure that everyone should experience. 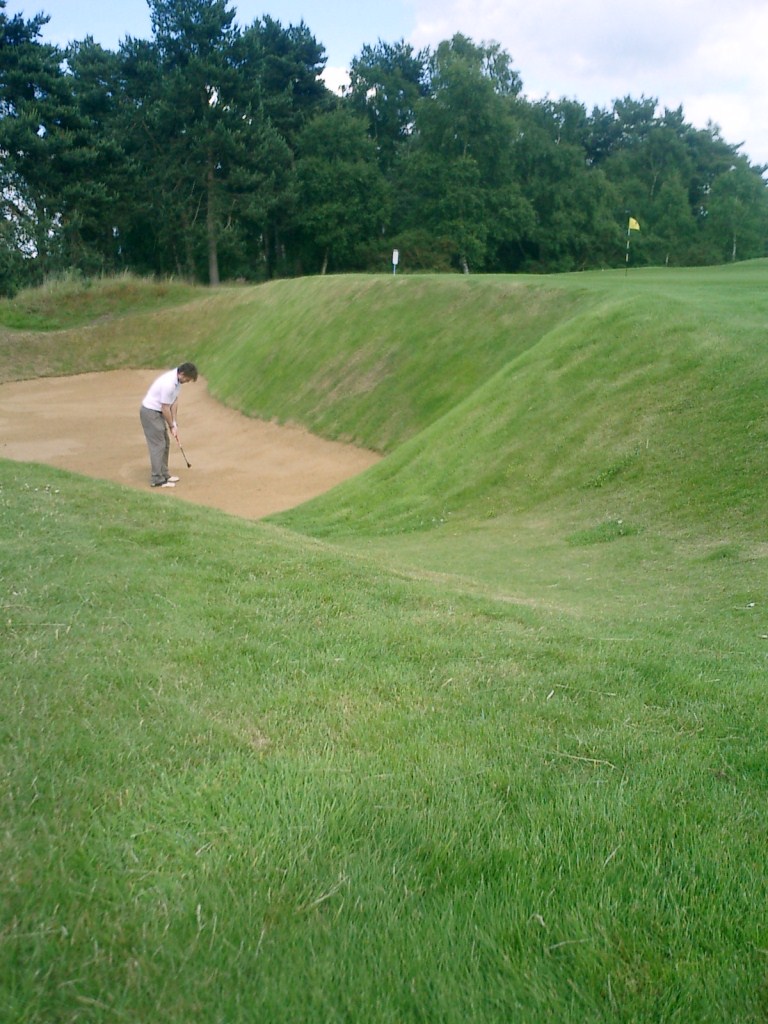 Woodhill Spa – the deepest bunker on the golf course – Hole 12

If you want a great example of a sustainable golf course then I would say West Sussex is the perfect example. The course weaves it way thought mature vegetation, over crumpled fairways  and between rugged sand areas. It is certainly a treat to play – not too long – with an abundance of variety. Variety of holes, hazards, features and shot opportunities. It has so much interest and strategy and is a visual treat to go. Everything just has the right proportion and nothing seems out of place or over the top. West Sussex is a golf course playable for all and certainly enjoyed by all. It is a wonderful walk in nature that can never tire.

We often hear of the great architects of the golden age era i.e Colt, Mckenzie, Raynor, Tillinghast etc but just maybe the ol’ colonel should be mentioned in the same breath…at least I think so.

*The colonel wrote many articles for golf and sports magazines discussing golf course architecture, drainage of sports fields, and general turf care. The editor of the Club Sportsman was so impressed by his articles, he published a collection of his contributions in a small pamphlet -The Principles of Golf Architecture (from Richard Latham’s book The Definitive Guide to The Hotchkin Course – Woodhall Spa)